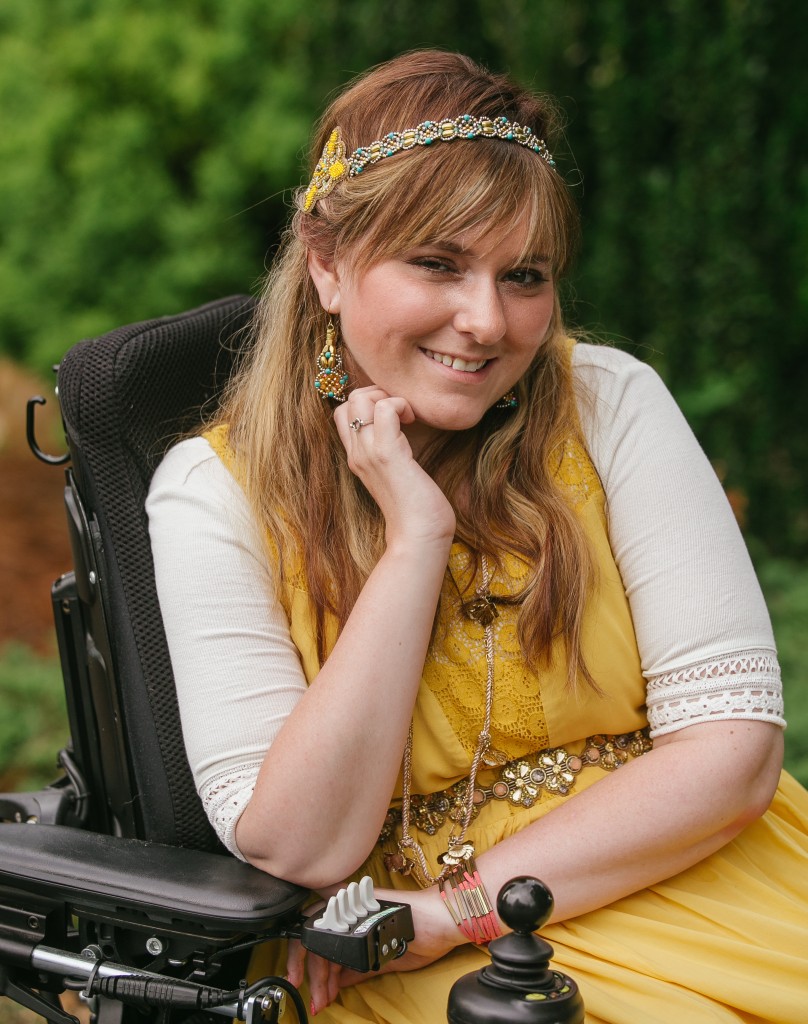 At the age of three, Ariella Barker was diagnosed with Spinal Muscular Atrophy, a genetic disorder marked by advanced muscle weakening and loss. Despite predictions that she wouldn’t be able to walk, SMA was no match for Ariella’s stalwart spirit. She walked, up until the age of eleven. And even then, she refused to let life pass her by. She just revved up her wheelchair and set out to catch her dreams.

In the face of an increasingly bumpy road, marked by additional, often painful, illnesses, Ariella attained many of those dreams. She became an accomplished attorney, law professor, and chose to become a Jew.

Growing up in a wheelchair wasn’t easy. Although her North Carolina school tested her as academically gifted, she was assigned to the special education classroom. Fortunately, that same year, the ADA (the Americans with Disabilities Act) passed, enabling Ariella to join her peers in the school’s honors classes.

Nevertheless, her social life suffered. Visibly different from her classmates, she endured daily taunts. “I didn’t have a lot of friends,” she says. “I would get home at three and study until eleven at night; it got my mind off not being accepted just because I was different.” Her family, however, encouraged her to believe in herself. “They told me if I put my mind to it, I could do whatever I wanted to do.” And that she did.

Ever since the age of six, Ariella knew she wanted to pursue a career in law. As she matured, and had to fight for her own rights as someone with a disability, she sharpened her focus on how to attain justice for individuals with disabilities via the legal system.

She earned her law degree at Emory University in Atlanta, Georgia, and set out for New York City to look for work. She anticipated that people in a big city would see beyond her disabilities. “There are so many people on the street who are different from others, many of whom are a lot more colorful than I am,” says Ariella. “I could feel accepted, not stared at, not treated differently.” She landed a position as an attorney for the City of New York in employment discrimination and labor law claims, under Mayor Michael Bloomberg’s administration.

With all her optimism about the city’s embracing of differences, she had her share of awkward moments. “I often got mistaken for being a court reporter or secretary. People looked surprised when I introduced myself as the attorney on the case. I even had a judge ask me to stand up while addressing her in court. She hadn’t bothered to look down to see I was in a wheelchair.”

Evidently, her passion for justice stemmed from her insatiable hunger for the truth.

In the midst of her college studies, she experienced impaired kidney function that required major surgery. She requested that her professors not mark her as absent during her recovery; they refused – except for one. “This professor, who was also a rabbi, stopped me in the middle of my plea and asked if there was anything he could do to help me,” says Ariella. “It made it clear to me what kind of person I wanted to be.” She decided to take his Jewish law class the following year. She realized that everything that the Torah stood for was what she too believed. She decided to convert to Judaism.

In 2007, while living in Downtown Manhattan’s Battery Park neighborhood, Ariella took a weekly two-hour trip via Access-A-Ride to the Upper West Side to attend Routes to GeRut, a program (based at Congregation Ohab Zedek) designed to educate those converting to Judaism and assist them on their journeys. “I don’t recall her ever missing a class,” says Rabbi Maury Kelman, the program’s director. “She had such a love and determination [to learn Torah]. She also followed up with me in between classes, asking questions, showing tremendous interest in learning and being the best Jew she could be.” She chose the name Ariella. “I looked it up,” she says. “It means lioness of God.” She related.

When Rabbi Kelman taught his students about the mitzvah of living in the land of Israel, Ariella took his words very seriously. “In a wheelchair, all alone, she picked up and left everything she knew here,” says Rabbi Kelman. “She had a job; she knew how to navigate the city; to pick up and move to another country is awesome — unbelievable.”

“The moment I got off the plane, I felt I was home,” says Ariella. She quickly cultivated a group of friends and began hosting Shabbat meals. “Everyone who meets her is enamored by her,” says Yosef Adest, one of her chevra of olim (recent immigrants), originally from Staten Island. “She’s a mover and a shaker; she’s not a spectator in life. Ariella loved being in Israel and being a part of her people and nation.”

That love included changing what needed to be changed. According to Adest, if she encountered a curb she couldn’t scale, she’d take a photo of it, put in a formal complaint, and got it fixed. He relates that she did this repeatedly when she moved to Tel Aviv, prompting many curb adjustments in the city. “One time, she went to a shul in the center of the city and someone had to carry her in,” says Adest. “The rabbi saw it and said, ‘you will never have to do that again.’ He immediately installed a huge, lavish ramp. Anytime we would pass the shul, Ariella would point to it and say, ‘see that; that’s my ramp.’

“Ariella sees no limits to what she believes she can achieve. Whatever strength she has she uses to help others and to affect [positive] change. The things she has achieved are impressive for any individual and even more so for someone who has these obstacles. But, I don’t see her as a person with disabilities, I just see her as her. And that’s impressive enough.”

Currently, Ariella is back in Charlotte, struggling with Trigeminal Neuralgia (a neuropathic disorder characterized by episodes of extreme facial pain, originating from the trigeminal nerve), as well as a gastro-intestinal condition that causes her to feel nauseous much of the time. But she’s definitely not down for the count. “Ariella’s faith, tenacity, and incredible connection to the Jewish people, Torah and mitzvot, will sustain her no matter what she goes through,” says Fraenkel.

“I’ve learned that we can’t really understand why God does what He does,” says Ariella. “In the book of Job, God rewarded him in the end for maintaining his belief. I keep that story close to my heart; I still try to believe that things will get better.”

Bayla Sheva Brenner is a senior staff writer at the Orthodox Union.

This article is from the 2015 issue of Belong Magazine. If you would like to receive a hard copy please email belong@ou.org.